LOMBARD RALLY BATH IS THE UK'S FIRST AND PREMIER RALLY RECREATION EVENT - A TOUR WITH UNTIMED SPECIAL STAGES. THE ROUTE AND STAGES ARE SET UP EXACTLY AS THEY WOULD HAVE BEEN ON THE ICONIC LOMBARD RALLY IN THE 1970s AND 1980s. COME AND JOIN US, WHETHER AS AN ENTRANT OR SPECTATOR, TO EXPERIENCE RALLYING AS IT WAS IN PERIOD, BUT WITHOUT THE PRESSURE! 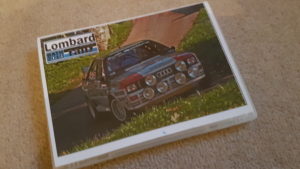 A great 30 minutes of entertainment, filming at all of the venues - Badminton House, Cirencester Park, Parc Bryn Bach and so on. See iconic rally cars at venues not visited since 1986!

LOMBARD RALLY BATH 2020 - THE TOIVONEN YEARS - WILL BE OUR FOCUS NEXT YEAR. WE WILL BE CELEBRATING THE LATE HENRI's VICTORIES IN A SUNBEAM LOTUS WITH PAUL WHITE IN 1980, WHICH MADE HENRI THE YOUNGEST WINNER OF A WORLD RALLY CHAMPIONSHIP ROUND, PLUS IN 1985 WITH NEIL WILSON - THE FIRST RALLY VICTORY FOR THE LEGENDARY GROUP B LANCIA DELTA S4.

We will kick off on Friday with a traditional rally "signing on", followed by a Rally Forum, Meet and Greet and Buffet Dinner. The evening will be hosted by well known rallyists, at Bath Racecourse.

Who will be there? We will host "star" drivers, plus co-drivers, connected to Henri.

On Saturday, after breakfast, our drivers will set off on a run around RAC Rally stages, based on classic 1970 and 1980s venues, in Gloucestershire and Wiltshire. Two of these venues will include the opportunity for spectators to view the entered cars, plus other iconic cars connected to Henri and his teams, PCA Ford, Sunbeam, Opel and of course Lancia. We recommend that you visit our spectator point - the Kemble Rally Festival - where the entrants will be both morning and afternoon, tackling two separate stages within the airfield. There will be other rallying attractions all day long. Entry is off the A429 having turned North from the M4, or South from Cirencester. Early Bird Tickets are now on sale https://www.eventbrite.com/e/lombard-rally-bath-2020-kemble-rally-festival--tickets-88114798735

Lunch will be taken in Gloucestershire where the cars will again be able to be viewed on a period stage, twice. The afternoon will see the cars tackling further venues, before returning to the Bath Racecourse again.

In the evening, the Rally Dinner will take place in the Georgian splendour of the Assembly Rooms in Bath

On Sunday a further run will be available to those entrants who want it, taking the cars into Somerset to the Royal Bath and West Showground where stages will be tackled before taking lunch at the Wessex Suite of the Showground, to finish the event off.

The 2020 Dinner will be hosted by Harri Toivonen, the late Henri's younger brother.

Would like to have a go but don't have a navigator? - we always have experienced co-drivers wanting "a ride" or maybe you have someone who would like to co-drive but is worried about making a mistake - don't worry, we will happily get one of the organising team to talk through the job of "the sack of potatoes" to help!

ENTRIES FOR 2020 HAVE OPENED, HALF OF OUR 2019 ENTANTS HAVE ALREADY BOOKED TO RETURN! EMAIL US IF YOU WANT MORE INFORMATION - WE DON'T EXPECT ENTRIES TO LAST LONG. tim@lombardrallybath.co.uk