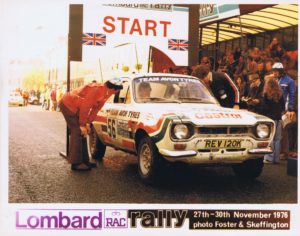 Look out for the fantastic range of new Toivonen Sport clothing!

The Route to be Taken

Lombard Rally Bath 2020 will again be based at the Bath Racecourse at Landsdown, on the edge of Bath. As in 2019. on Saturday morning the first car will leave at 8.30a.m. following a route that initially recreats the first morning of the 1986 Lombard RAC Rally. Starting from Bath Racecourse the cars will head into Wiltshire and Gloucestershire, to the first stage. Mid-morning on Saturday will see the cars arrive at the only spectator base, near Cirencester. Watch our spectating page for more details – entry will be very restricted indeed and by advance ticket only.

The cars will then have another run over both stages, before moving on to other stately home style stages in the area, taking lunch at one of them.

In the early evening the cars will return to Bath Racecourse.

SOCIAL DISTANCING – Should it be necessary to limit the number of spectators, or even close the venues completely, the whole event will be live streamed to ticket holders so that they will miss nothing. The filming will include a commentary and interviews with entrants at Kemble – nothing will be missed!

SATURDAY’S Dinner will take place in the Georgian splendour of Bath’s Assembly Rooms. Guest tickets are available, and, like last year, will raise funds for the Charity chosen by Lombard Rally Bath’s organisers. Again, should social distancing still be necessary, the Dinner will take place on a “Drive-In” basis in front of a large screen to allow suitable entertainment.

On Sunday Morning, after a leisurely breakfast there will be an optional run back to the Mendips, offering two more stages to drive,  plus a run up Cheddar Gorge, which proved so popular in 2018, before lunch.

<>
The entries for Lombard Rally Bath 2020 are two thirds full,so if you would like to join us, don’t hang about they won’t last long!